Man we had a brutal winter. It is amazing how quickly things changed and now we have warm weather and flowers and cutting the grass once a week.

But remember, large sections of the Bay were frozen over. Icebreakers were having trouble keeping the channels clear. That brings back memories of stories from the 1800s of some severe winters. So severe that ice flows picked up a light house and carried it along with the ice for a distance.

This had to have been a spider light and not a caisson light. I can’t imagine any ice being able to move a light house like Baltimore Light or Sandy Point Light. Actually Bloody Point light was affected by a winter storm in the late 1800s. Not because of ice but because the wave action undercut the foundation on one side and caused the light house to tilt. They tried different things to fix it. The first couple tries didn’t work. They then tried an extreme solution. They dug out under the foundation on the side that didn’t have a problem. This caused the light house to straighten some. and then they put down a scour apron of large rocks to prevent any more erosion. That has worked to this day.

The ice was so bad this year that on March 9th the Coast Guard said there could be no boats above the Bay Bridge without Coast Guard permission and this ban was in effect until April 15th. APRIL 15th!!! That is a lot of ice and that is late in the year. The ban upset some people because the striped bass season started 3 days later on the 18th.

I would love to put up some pictures I found on line but they have copyright. Here is a link though. And here is one I took although it isn’t as impressive as the ones in the link. 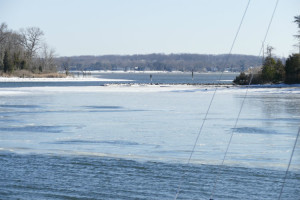